Wanted something different for brekkie. Found 2 recipes, both up on the site now and sort of combined them to make my own. One Pan Brekkie found on a Coles website and Morning After Breakfast found on a Jamie Oliver website.

Well i have started by cutting up 2 large potatoes into smallish, but not tiny chunks and the same with half a sweet potato. I have added these to boiling water and boiled until just cooked through. About 5-6 minutes.

Next i have cut up a chicken sausage, which had been cooked the night before and not eaten. 1/4 of a garlic meetworst and 6 bacon rashers. I have also thickly cut up a red capsicum and 2 tomatoes.

I have then drained the potatoes and then placed these into a hot pan and seared these until golden and have a crispy skin. About 5 minutes. I have then taken these from the pan and set aside for later.

I have then added all of the meat and other vegetables into the pan and cooked until the bacon is cooked and the tomatoes and capsicum are soft.

I have added the potaotes back into the pan and mixed through until all combined.

Making 4 wells in the pan, i have added 4 eggs and then placed a lid on the pan for 4 minutes until the eggs are cooked to your liking. I accidentally cooked them a little longer so the yolks were a bit more set then my liking.

I have then served this alongside some crusty bread. Just divine! 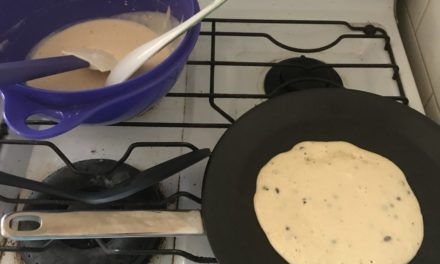 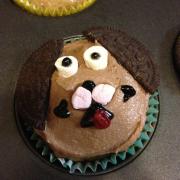 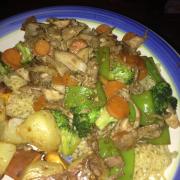 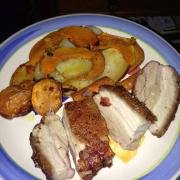