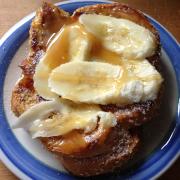 Breakfast for Saturday was Peanut Butter and Banana French Toast.

I have used a nice crust vienna loaf, cut into slightly thick slices.

I have then spread crunchy peanut butter onto both sides of the bread and then added sliced banana onto one side. I have only made one sandwich with the banana in the middle as Ryan does not like bananas.

Sandwiched the other slice on top and then placed into the egg mixture.

The egg mixture, for this i have whisked the egg, freshly squeezed orange juice, cinnamon, nutmeg and cayenne pepper together and then covered the sandwiches with this mixture.

I have made two french toast sandwiches so i have doubled the egg mixture ingredients.

I have served these with more banana on top, some creamed honey and icing sugar.

I have gone to a Tupperware party yesterday and there the host has made a chocolate sauce.

For this she has cut up a large toblerone and used a 1 cup of thickened cream in a jug and then put this in the microwave to melt for 40 seconds.

Brought this out and mixed and then back in for another 40 seconds.

One this has melted she has put in little containers and placed in the fridge 5-10 minutes to thicken slightly.

This was served with marshmallows, cut banana and strawberries. YUM!

Using one chicken breast i have cut this up into little nugget pieces.

I have then placed 1 cup of flour 2 teaspoons of paprika and every other spice in this recipe in a plastic bag.

I did not have any eggs left so i have used 2 tablespoons of butter melted.

In a small fry-pan i have placed some oil and put this on to heat. Once ready i have cooked this chicken in batches for approx 5 minutes, or until cooked inside.

I have then let drain on paper towels until ready to eat.

Served these on some of Ryan’s rice. Even have enough for lunch tomorrow!!!